What people are saying…

Here’s more from other graduates of our courses about how engaging the Mutual Awakening Practice has transformed their consciousness & lives:

— This is such a joyous, awesome privilege

I’m absolutely relishing practicing Mutual Awakening. It’s beyond exquisite. The changes I’m noticing in myself include an ongoing dissolving of unsupportive traits, a deepening peace, the beckoning of more possibilities, more, more. This is such a joyous awesome privilege, thank you. Becoming part of the shared experience of Mutual Awakening with other beautiful hearts is a pristine gift. Indescribable Love!

— It gives me hope for the world

The feeling of connection I experience from the Mutual Awakening Practice carries into my life, making it so much easier, fulfilling and joyous. It gives me hope for the world.

— I participate in what’s going on from a connected space.

In the very beginning, the practice takes a little getting used to. After practicing Mutual Awakening for over a year, I’ve noticed that it allows me to have a more present experience of life, dependably. It has helped me more fully connect with the people around me so that I participate in what’s going on from a connected space. I’ve noticed that the practice has softened me and helped me go toward things instead of holding back, making up a story, analyzing or compartmentalizing. I’ve found it easier to discuss difficult, polarizing topics with friends that have different views than mine because of the softening in me.

Patricia’s next course begins Saturday, May 28th and there is still time to register to join us.

Plus, the Pull of the Future Bonus ENDS TOMORROW, Sunday, May 15th at 11:59 pm Pacific Time. 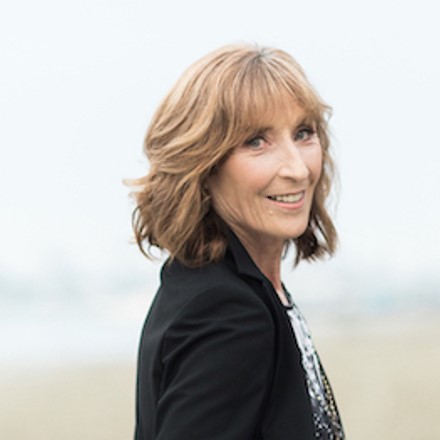 In the world of spiritual enlightenment, people who have experienced awakenings almost always experience them individually – eyes shut, in quiet solitude. The spiritual paradigm of the last three thousand years has been singularly devoted to our individual salvation or solo enlightenment.

Patricia Albere, uniquely experienced a sustained awakening that resulted in a different kind of realization, a dual realization that happened with another. That shared awakening points to a new dimension of consciousness and an extraordinary possibility for humanity’s future. The consciousness mirrors the discoveries of quantum physics, and some have called this mutual awakening or unilocal realization.

Patricia is perfectly positioned to bring forth the transmission, practices and perspectives that will allow us to awaken into shared unity together. Her work creates a powerful and palpable field of shared consciousness and love that reveals previously unimagined human potentials that can move humanity far beyond the limits of personal growth or self-development and into mutual awakening. Patricia is an internationally known spiritual teacher, visionary and the founder of the Evolutionary Collective and bestselling author of EVOLUTIONARY RELATIONSHIPS: Unleashing the Transformative Power of Mutual Awakening.